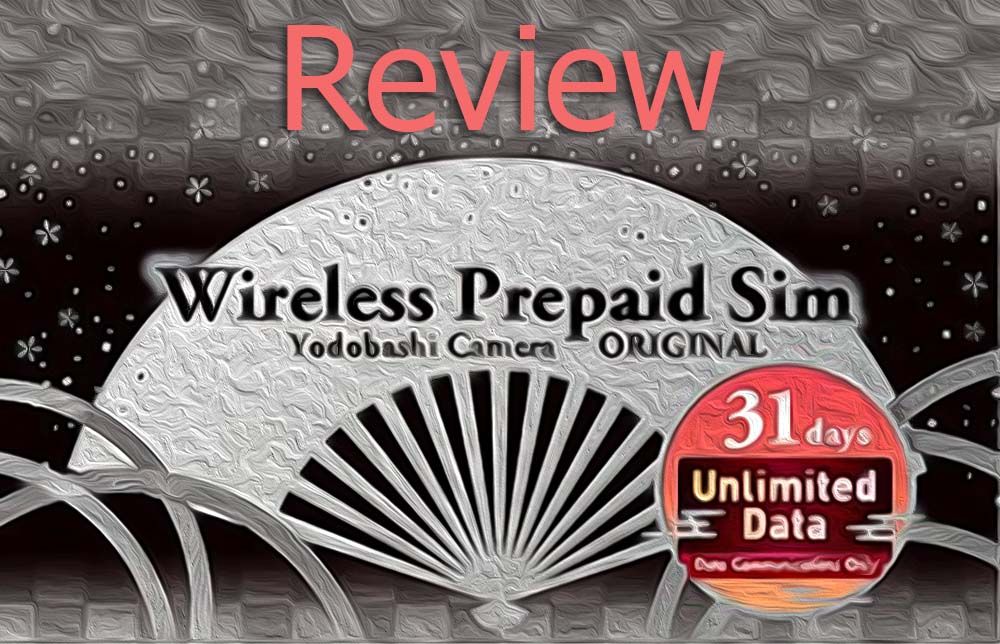 No, I do not recommend this. It’s expensive and my free 2G roaming from T-Mobile was sometimes more dependable than the “4G” service. Just use Starhub's roaming plan. It's not too expensive and it runs fast but it has a data cap. If you're not Singaporean, whoops.

I was in Japan for 3 weeks, and I needed some of those sweet sweet internets for... work, I swear. Now there are a lot of choices for getting your interwebs fix, but this time, I needed to get something without a data cap. I have legit reasons. Stop asking. Wouldn’t you know it, Yodobashi has a SIM card section, an entire wall of different SIM cards for you to throw your money at.

Most of the cards had a data cap ranging from 2GB to 10GB. Data caps were not a thing I wanted to deal with, since I needed to download “databases” that were potentially a few gigs in size. Then I saw it. Tucked in the small recesses of the abyss was a selection of  SIM cards. The magical words “Unlimited data” was proudly advertised on the front. And it only came in two flavours, 8  days, or 30 days.

It was perfect, a bit too perfect in fact.

Suspicious, I asked the storekeep regarding the pesky secret data caps that definitely came with these. He reassured that it didn’t have any of those data caps and I get unlimited 4G data. Or maybe he told me to go kill myself for asking stupid questions. I don’t know, my Japanese is not that great.

Satisfied, I purchased the SIM. I had to do some setup with some APN settings on my phone, but that wasn’t too difficult. The instructions were fairly easy to follow. You just need to figure out where the APN settings are in your phone (Settings is a good place to start looking, I hear).

As life would have it, when I tested the speed, and got a paltry 1.1 Mbps. That’s MegaBITS per second. For those of you not technically savvy, that’s about 140 kilobytes per second. The last time I had to deal with that kind of speed, I had to choose between calling people on my landline or sending electronic mail. Loading heavy web pages took literal minutes to complete, sometimes outright timing out. Though 1.1Mbps is technically still well within the realm of “up to 375Mbps”, I couldn't help but to feel slightly cheated. And of course, there was a strict no refund policy on the sim cards.

Since I had already been ripped of $80, I figured I may as well try it out around Japan. I tested the speeds at least once per city as I travelled the country. And here are the results.

And here it is in a map view for you visual people.

The results are telling. With an average speed of 940Kbps, it’s akin to something I’d expect to get from a motel WiFi in the middle of a third world country. Considering I paid about $80 for this and that I am in a decently technologically advanced country, I was expecting something faster than a dial up connection. The 10GB “database” that I intended on downloading would have taken about 24 hours to complete, assuming it didn’t disconnect every few minutes.

The point is, even in San Francisco, where I complain that the Internet is shit, it's not consistently this shit. I do actually have times where the Internet can pass off for something you'd expect to find in 2008 era Singapore.

The point is, even in San Francisco, where I complain that the Internet is shit, it's not consistently this shit. I do actually have times where the Internet can pass off for something you'd expect to find in 2008 era Singapore.

I take it back, the cellular internet in US (on T-Mobile) is pathetic as well. I suppose the only reason I don’t notice it is that I am typically on WiFi at work or at home.

I’m just going to leave this here to prove that I’m not just being bitchy about internet speeds.